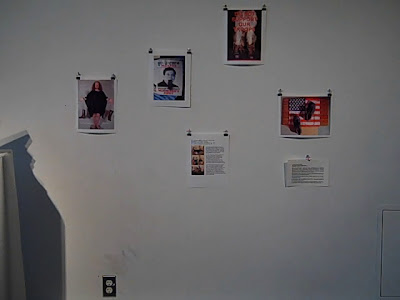 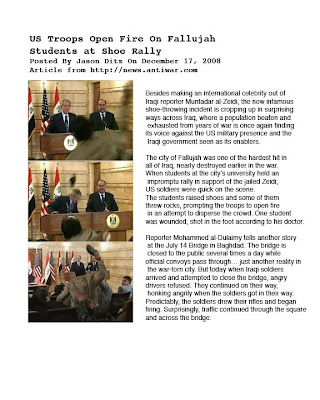 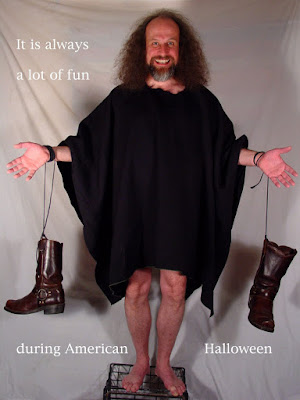 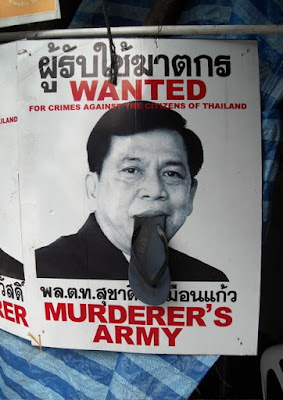 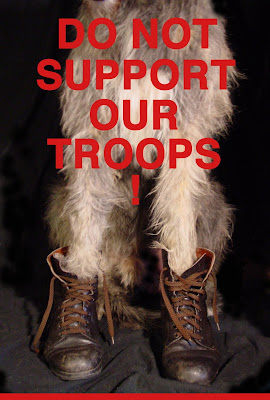 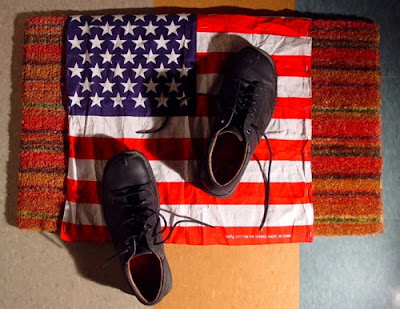 Milan Kohout : Action for The Politics of Shoes @mobius 05-24-09 from MobiusArtistsGroup on Vimeo.

Milan Kohout : Action for The Politics of Shoes @mobius 5-25-09 from MobiusArtistsGroup on Vimeo.

"Shoe is the dirtiest think in Iraq as you know .. therefore I put it on the hands of that tortured person american cowboys boost.. -also taken immediately when the abu graib prison scandal was exposed... even my mobius comrades were pissed about me... well while it was so so so so so obvious what this empire was doing.. but in some ways the native americans were so brainwashed and blind and did not admit that... and are still unfortunately...there is so deep propaganda bullshit embedded in the heads of the people here that I can believe that... well fascist Germany was a similar story..

Something about our export of "democracy" ; what is also intensely interesting is that after each big bombing in IRAQ the reports said that there was a lot of shoes all around and some of them were falling from heaven seconds after the explosion...

Something relating to Bush & Shoe performance in Bagdad. This picture I took in the rebel camp in Bangkok where I performed two weeks ago -just the illustration how strong is a symbol of a shoe in those cultures.

To call somebody a dog is the worst offense in Iraq- therefore I used a dog as a symbol for our soldiers (picture taken at the beginning do the iraqi war - of-course some people here wanted to kill me for that at that time)..

Let us express the solidarity with our real performance artist from Baghdad!!!!! Those shoes on the american flag were the homage to the painting of a surrealistic artist Magritte called This is not a pipe. Did you notice? On the side of the flag there is Made in China and it is a scarf."

Milan Kohout (now a US citizen) is originally from The Czech Republic.. Here he got his M.S. in Electrical Engineering. He was an independent artist in so-called “Second Culture”. Later he becomes a signatory member and art activist of the dissident human rights organization CHARTER 77 (group of mostly artists from “Second Culture” was nominated for the Nobel Prize in 1985 and initiated non violent Velvet Revolution which toppled totalitarian regime in 1989). Following many interrogations he was forced by CZ security police to leave his country in 1986 due to his political art activism. After several years in a refugee camp he was granted asylum in the United States.

In 1993 Milan received his Diploma from the School of the Museum of Fine Arts in Boston. Since 1994 Milan has been a member of the Mobius Artists Group (www.Mobius.org). Here he has created many full-scale Performance Art pieces (both collaborative and solo) His work concentrates mostly on the subject of human rights (recently rights of Roma/ Gypsies) and politics (critique of totalitarian capitalism and fundamentalist religions) As Mobius Artists Group member he has participated on numerous international art exchange programs and festivals around the world (China, Thailand, Croatia, Taiwan, Czech Rep, Poland, Cuba, USA etc). and has been the recipient of number of awards, grants, residencies (Grant from The Fund for US Artists at International Festivals, Tanne Foundation Annual Award, First Prize at International Theater Festival in Pula, Best National Czech Independent Film Award, Arizona State University residency, PSi conference in London 2006 etc.)


Note from the Curator:

Perhaps this was really meant to be published on July 4th - Independence Day.

Posted by The Politics of Shoes at 9:00 AM No comments:

1. For some strange reason, the last two automatically scheduled Featured Artist of the Day posts didn't occur as scheduled:

2. Had forgotten to add Sam Tan's links to his post - they were just added.
Posted by The Politics of Shoes at 1:29 AM No comments: 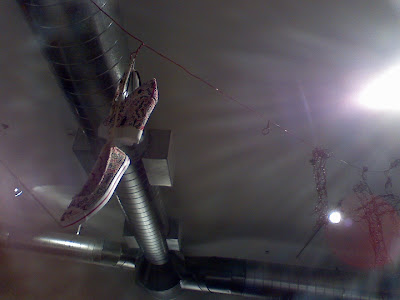 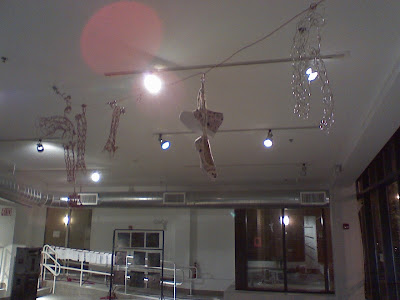 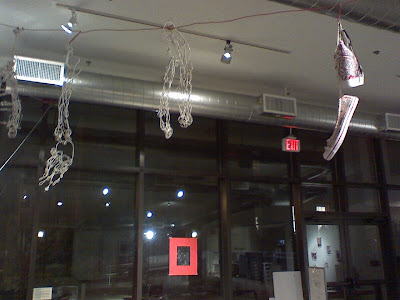 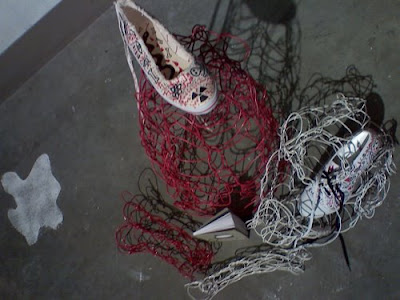 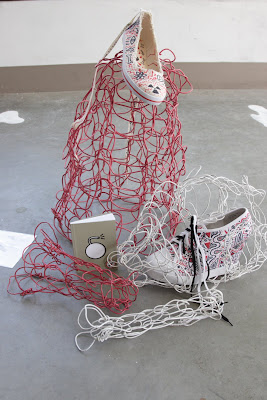 white for bones, red for bodies which have been skinned alive 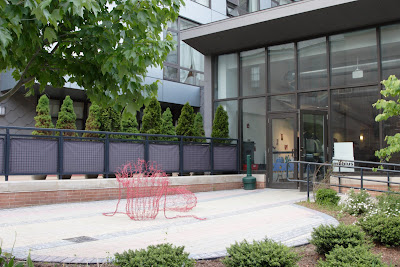 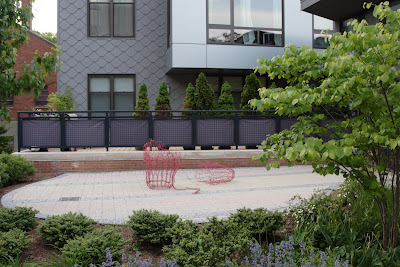 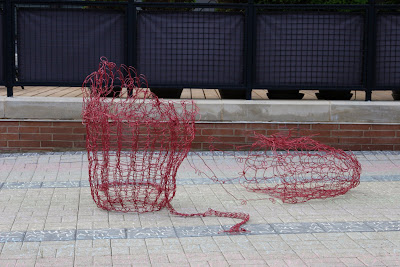 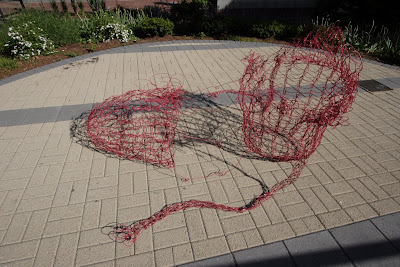 "Keep tight inside of them -- their magic must be very powerful, or she wouldn't want them so badly!"
- from the Wizard of Oz film with Judy Garland

Lermontov: When we first met ... you asked me a question to which I gave a stupid answer, you asked me whether I wanted to live and I said "Yes". Actually, Miss Page, I want more, much more. I want to create, to make something big out of something little – to make a great dancer out of you. But first, I must ask you the same question, what do you want from life? To live?

Vicky: To dance.
- from the Michael Powell film “The Red Shoes”

“Dance you shall,” said he, “dance in your red shoes till you are pale and cold, till your skin shrivels up and you are a skeleton! Dance you shall, from door to door, and where proud and wicked children live you shall knock, so that they may hear you and fear you! Dance you shall, dance—!”
- from Hans Christian Anderson's fairy tale “The Red Shoes”

"Something about the power of ruby/red footwear – either to empower or overpower the wearer. It's strange that both although the ruby slippers and the red shoes ostensibly represented these two very different kinds of power, the end result was similar - for wasn't Dorothy flung back (even though through her own will) from a dreamland in lurid color to an arid, Grapes of Wrath type existence in black and white – a kind of living death? And in both cases, one could only remove the red shoes/ruby slippers by dying.

Isn't that kind of weird that so many children's stories turn out to be about death?"

Jane Wang is a member of the Mobius Artists Group. Although she primarily composes music for dance, theater and performance art theater-based work, her principal instruments being double bass, piano and toy pianos, she has recently returned to her on-going love of sculpture and 3-dimensional structures. Inspired in part by the touring exhibition, Radical Lace and Subversive Knitting, and the performance artist Hanne Tierney who she frequently collaborates with, she started working in the medium of wire to create large sculptures.

Posted by The Politics of Shoes at 9:00 PM No comments: 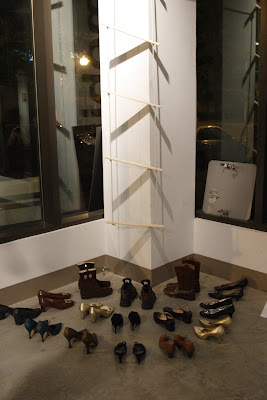 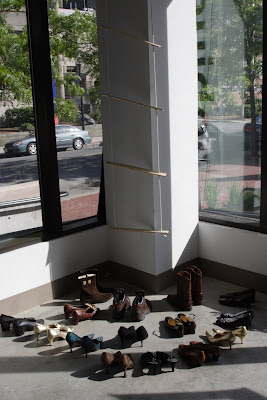 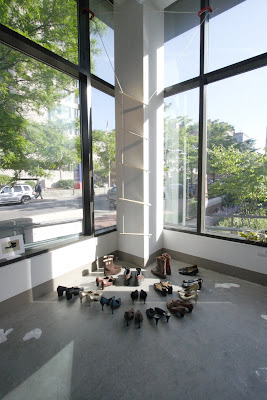 Original intention was to place a very tall aluminum ladder resting against the window. Pairs of varied types of women's boots are placed around the base of the ladder enclosing and encircling it.

The artist states in an email to the curator:

"In my perfect world, the ladder would be an unextended aluminum extension ladder affixed to the floor invisibly with very strong double-sided tape and the top resting against the window. I would put some soft material such as fleece invisibly between the metal and glass to protect the window. The boots would surround and fill in the space at the bottom of the ladder to form a circle. That's what I see in my mind's eye.

That said, the height of the ladder issue is important and an interesting challenge to be reconciled as I think about it and your suggestions. There's a solution somewhere"

Leigh Waldron-Taylor explores what is the same but different through various genre and media. Leigh’s recent work is conceptual and organized as performative installation in which anything is up for scrutiny and rendered in any way possible. This represents a movement away from work done previously which focused on visual representation via painting and printmaking. Leigh has studied in Providence, Toronto, and Provincetown and exhibited in Boston, Toronto, Provincetown, Berlin, and San Francisco.

Notes from the Curator:

1. A few visitors to the exhibit said they wished that the artist hadn't divulged so much of the process in her statement about her work. I told them that that was entirely my fault. Actually the artist hadn't really said anything in particular about her work, other than the title. I was the one who was fascinated by the process of how to take an initial thought and transform it into reality.

All that said, everyone had different interpretations of what the installation and "dream" was about. Some thought all the shoes/boots belonged to the same person and perhaps it was a commentary on the excess of shoes and upward mobility. Others thought it might be something about going to heaven especially after I revealed that the artist said that since she had found many of the more ornate high heeled shoes at second hand shops or estate sales, perhaps some of the shoes were from elderly ladies who had passed away. If one interpreted the piece that way, it's interesting to note that the boots, which might represent the working class, are closer to the ladder and the more ornate shoes, perhaps representing the aristocracy, fall further behind. Finally, I must confess that when the artist first mentioned "army of boots", I wasn't sure if this might be some kind of "support our women in the armed forces tribute" of some kind.

The artist never revealed to me what the true meaning underlying her work meant to her. Perhaps that is best and as she intended.

2. I especially loved how beautiful this installation looked at night with the shadow play of the ladder against the white pole. Sara June in her two performances made use visually of the artist's installation and had encounters with some of the shoes. Fortunately Leigh was fine with having her shoes and boots moved around during the performances and wasn't attached to a particular arrangement even during the ensuing exhibit.

Posted by The Politics of Shoes at 9:00 PM No comments: