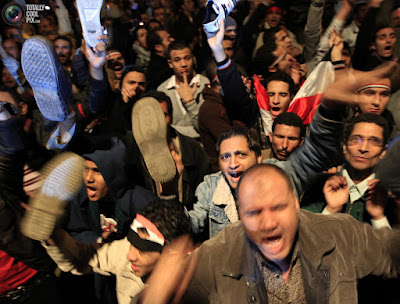 Anti-government protesters in Cairo's Tahrir Square wave shoes in dismay as President Hosni Mubarak speaks to the nation February 10, 2011. Mubarak provoked rage on Egypt's streets on Thursday when he said he would hand powers to his deputy but disappointed protesters who had been expecting him to step down altogether after two weeks of unrest. Leave! Leave! chanted thousands who had gathered in Cairo's Tahrir Square in anticipation that a televised speech would be the moment their demands for an end to Mubarak's 30 years of authoritarian, one-man rule were met. REUTERS/Goran Tomasevic 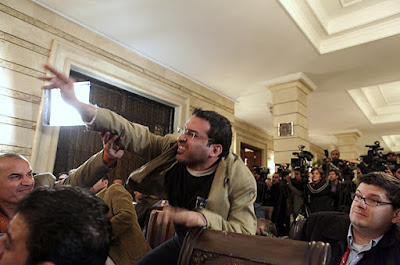 Time online article about Muntazer al-Zaidi
The Return of Iraq's Shoe Thrower: A Rebel's New Cause
By Nicholas Blanford
http://www.time.com/time/world/article/0,8599,2049523,00.html

Posted by The Politics of Shoes at 2:00 PM